An ode to the mountains, gravel that is no longer gravel and the cohesion of unknown friends 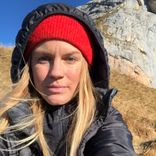 It’s not a race, it’s an adventure. 450 kilometers with 10.000 moE unsupported through the Dolomites.
The key data speak for themselves, you don’t have to think about it for long and just get your friend hooked and take her with you. We started as a couple and arrived back in the small 70s gym in Cittadella after 4 days with many more friends.
This won’t be a detailed race report, because it wasn’t a race, this will be more an attempt to summarise all the emotions and little mini-adventures with a little race kit list at the end. So what can be the added value of reading this article? Maybe a sly smile on the lips and playing with the idea of writing down this adventure somewhere. You should, if you ask me!
It actually took a few weeks for the euphoria to subside and for clearer thoughts to emerge, so as not to end up with a “It was all just so incredibly beautiful, and the people, and the mountains, THE MOUNTAINS! And the pizza” text. Not entirely innocent of the excitement and euphoria was certainly the fact that after more than a year in the home office, one could participate in an event again. Meeting new people, sitting in restaurants and all that still felt totally surreal on the evening of our arrival. 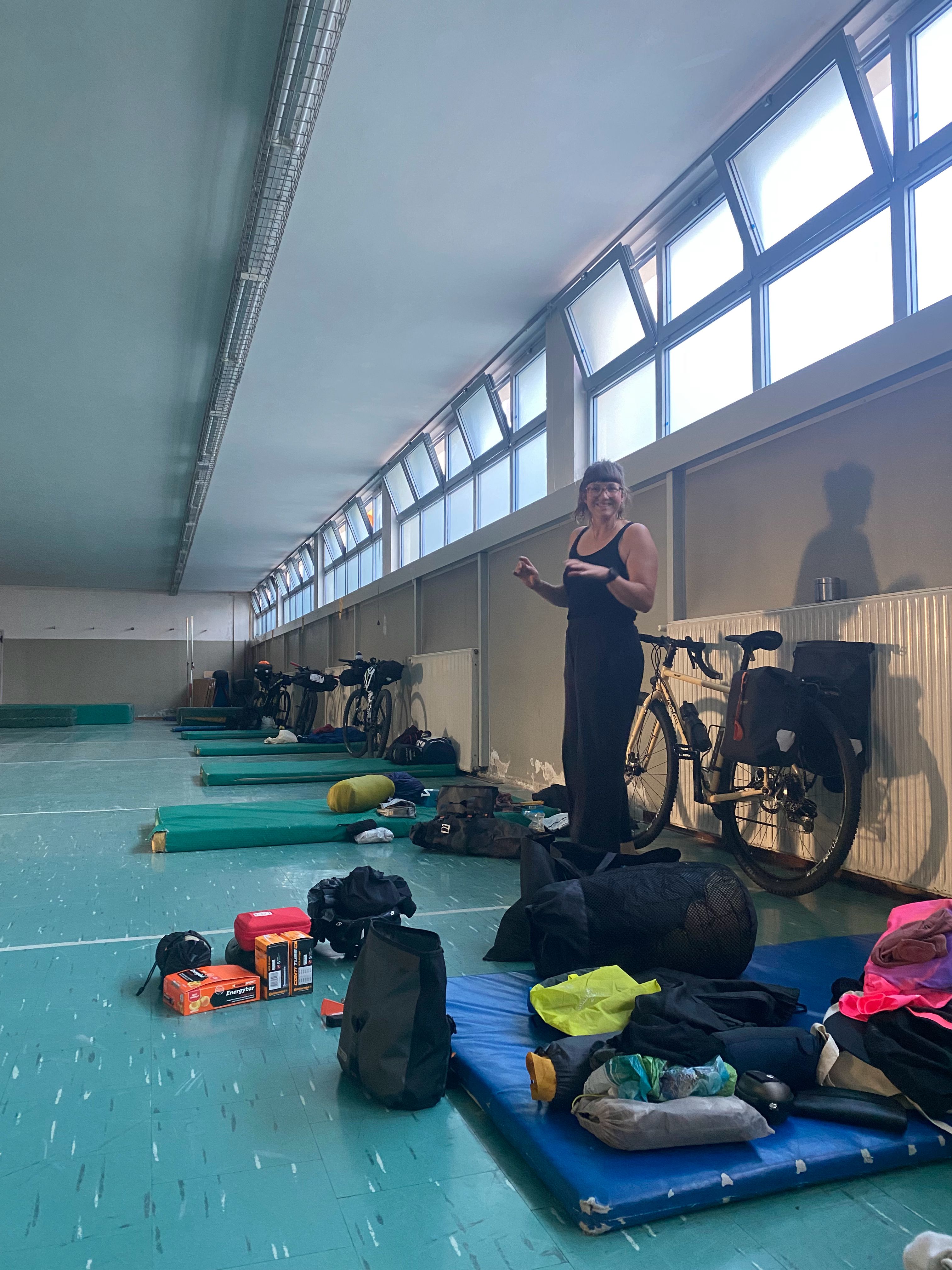 So at 8am on Saturday in the picturesque market square of the small town, almost 150 riders* set off. Over asphalt, gravel, forcella’s, meadows, rivers, past lakes and over mountains. And the first climb came right after 27km, up Monte Grappa. Andrea has scouted here in par excellence. The finest mountain bike paths wound their way up the 1430 m in only 13 km. I don’t know how long it took us to get to the top in the end, but halfway up we started to make nice acquaintances by chance. Sometimes out of necessity, when someone needed an air pump or when you needed your brakes adjusted again. By the way, our group had already grown from 2 to 5 on the first evening in Cittadella. Two dear acquaintances from Munich and a friend from Leipzig were also there and joined us right away, Jan and Robert, who always waited for us at the top of the mountain. Somehow our joint pace adapted quite well. Once we reached the top, I had to say hi to the guy with the red bike. While passing by, I had overheard that he had introduced himself as a mechanic to another rider. He laughed when I told him that and asked him to take a look at my brake cables. In exchange for a beer in the next town, the next two joined the group. Filippo was with Andrea. Both couldn’t have been more different, but were so pleasant and had a ton of adventures to tell.
So after we had eaten and drunk all the paninis and cafe doppios at the hut, the downhill fun really started. Directly down the mountain on the most blocky paths. A fully would have made a lot of sense and been a lot of fun, but hey, you can also ride the Veneto Trail with a gravel bike and 42 tyres. You either brought your skills with you or learn them there. Easy as it is. Almost everything was rideable. Another learning we did after the first day was the fact that 100km with 2000hm can fill a day. Ambitious as we were, we had previously divided the route into 3 ½ days. Would have been doable, if it hadn’t been for the constant paninis, doppios and flat tyres (all of them tubeless, btw). 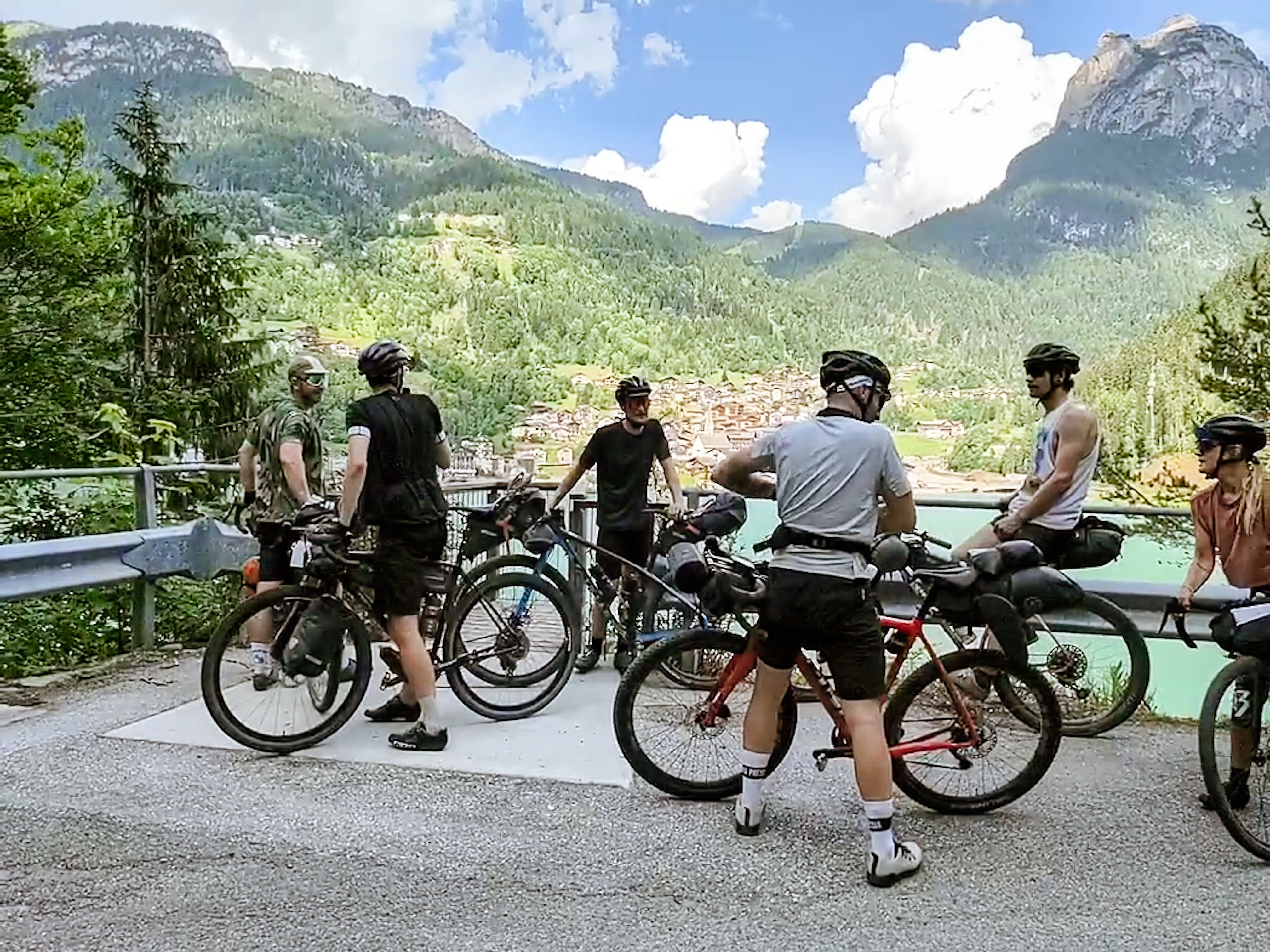 DAY 2- Outside is free. And this is where the fun really begins

We spent the first night in Lentiai, by the river. Waking up with the first rays of the sun and the roaring river next to us, we walked over wide fields and bumpy dirt roads through small villages, where we were always greeted warmly by the people. Here and there we found fountains to fill our water bottles, but above all to cool ourselves down. Cycling at 30 degrees and in the blazing sun. Always in the direction of Forcella Ambrizzola, always slightly uphill and everyone always with a smile on their face. In the course of the day we kept meeting the Austrian guys in their smart shirts, as if they had just come from Boulder, Colorado. Every 6 kilometres they had a flat tyre, which led to them splitting up in the end. Just as often, we met the guys again and again on the route. Shortly before Alleghe, we asked around in town for the best pizza restaurant and ended up in a small, secluded and inconspicuous restaurant, in whose outdoor seating there were large tables with all the construction workers who were having their lunch break. Over pizza and pasta they talked again about past adventures called “Wolfs throat” and what it was like to work as a frame builder. Somehow a break time of almost 3 hours settled there. Just before we were about to get our sluggish bodies back on the bikes, Jan, our frame builder, noticed a crack in Andrea’s frame. A crack in the frame just before we were to go over the Forcella Ambrizzola. The Forcella Ambrizzola is a single trail on the Dolomite high pass and is normally hiked. For this reason, Andrea finally decided to end the Veneto Trail here. We rode a few more kilometres together until Sandra, Andrea and I decided to look for shelter before the mountain due to a 60% chance of thunderstorms. The other guys started the evening with the first drops of rain and made it to Cortina just before complete darkness. 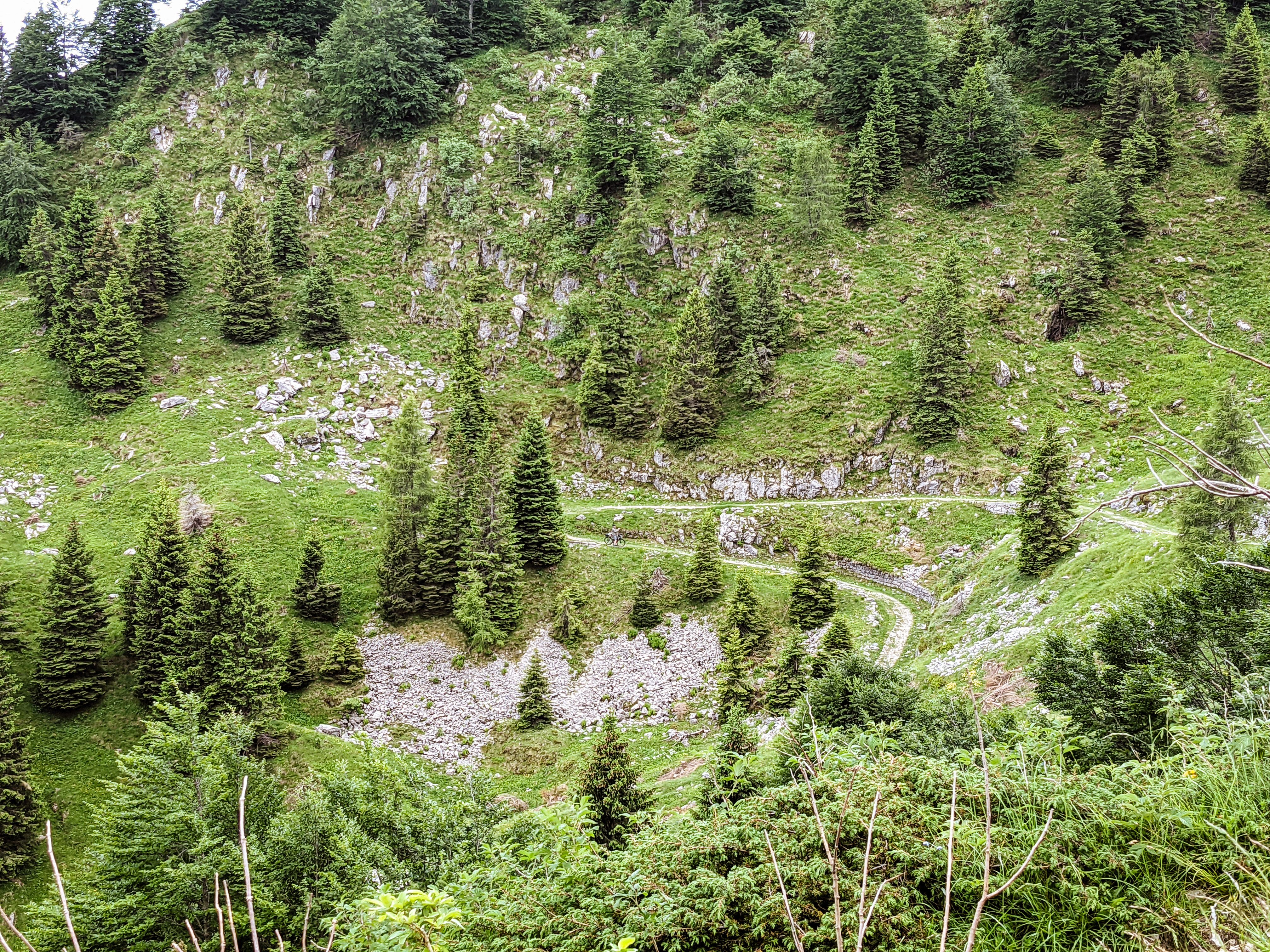 DAY 3- Hike your bike for a view

The next morning, after a fond farewell from Andrea, Sandra and I set off. The real part, for which I had signed up here a few months ago, was about to begin. Straight through the heart of the Dolomites towards Cortina. The whole climb up to the Forcella took a sweaty four hours. Almost kitschy, the individual peaks of the Dolomites rose up all around us in front of wide flowery meadows as far as the eye could see. Fortunately, we had to carry, pull and tug our bikes up the last few meters of altitude along a blocked hiking trail, because that gave us even more time to marvel at this beauty. At the top, the Forcella descended slightly sloping and covered with snow. Here we are at the highest point of the route, at 2277m above sea level. The downhill that was now in front of us was the most beautiful of the whole route. The rather narrow and quite blocky paths down to the valley were quite demanding with our 42 tyres, but it was always fun. After what felt like an eternity, we rolled into the center of Cortina. The banners from the Lavaredo Ultra Trail, which had taken place the weekend before, were still hanging here. After ice cream and a café, the decision was made - we won’t manage our own goal of 3 ½ days and will therefore switch to the road, always along the original route. 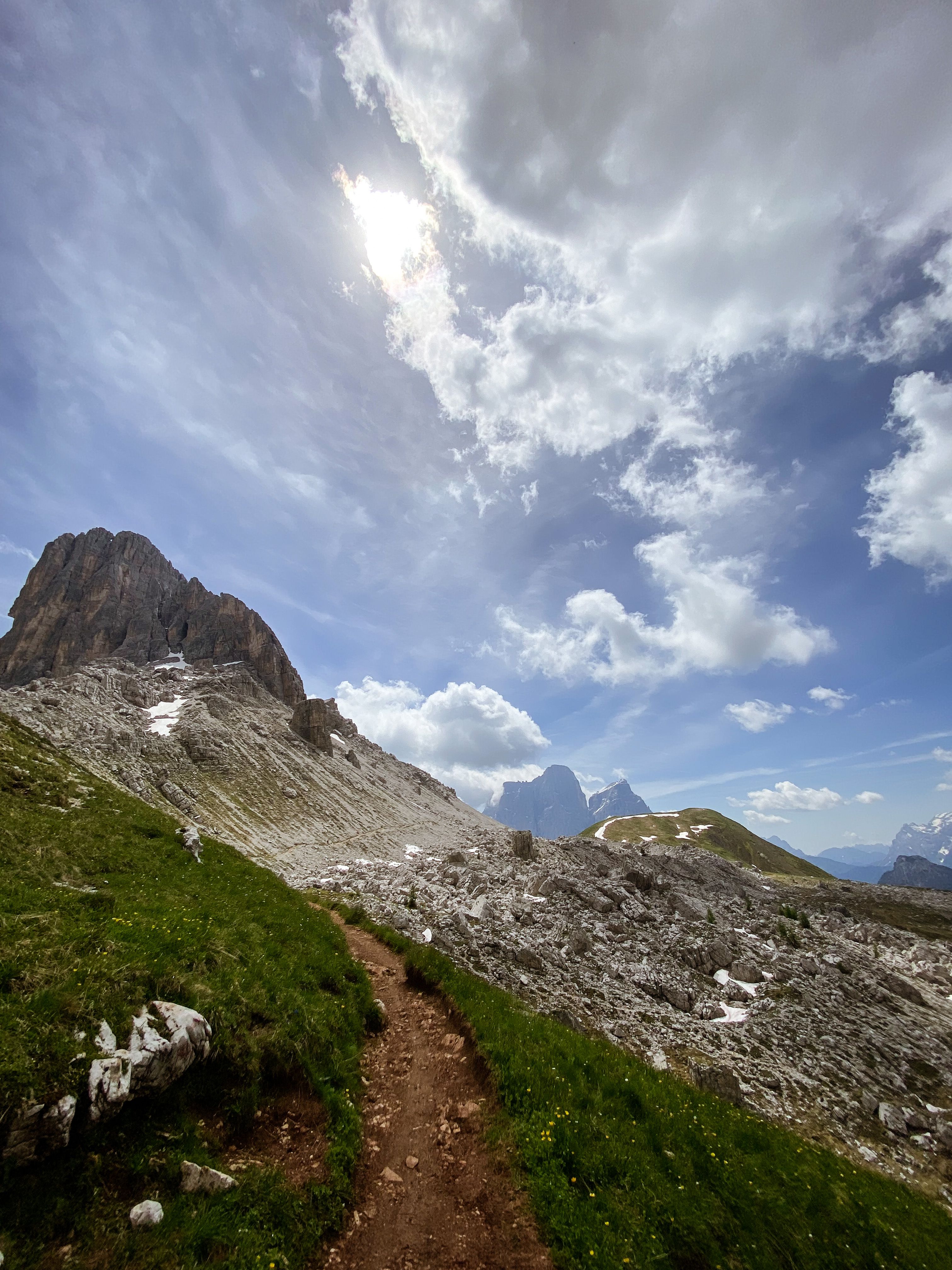 In the end, it was 20 km and 2000 moE less that we had done and therefore we were not listed in the finisher’s list. But these are only small side notes, because how cool it is when you meet your people spontaneously on the course again and again and just enjoy the journey, no matter how it ends. In order to meet Filippo, Jan and Robert on the last evening, we rode late into the evening. Guess what, that was just the nicest part of the journey. Adapting to the circumstances and enjoying the ride. So in the early afternoon we arrived done and dusted from the last tarmac bit. We sprinted in this lovely 70s gym in Cittadella. 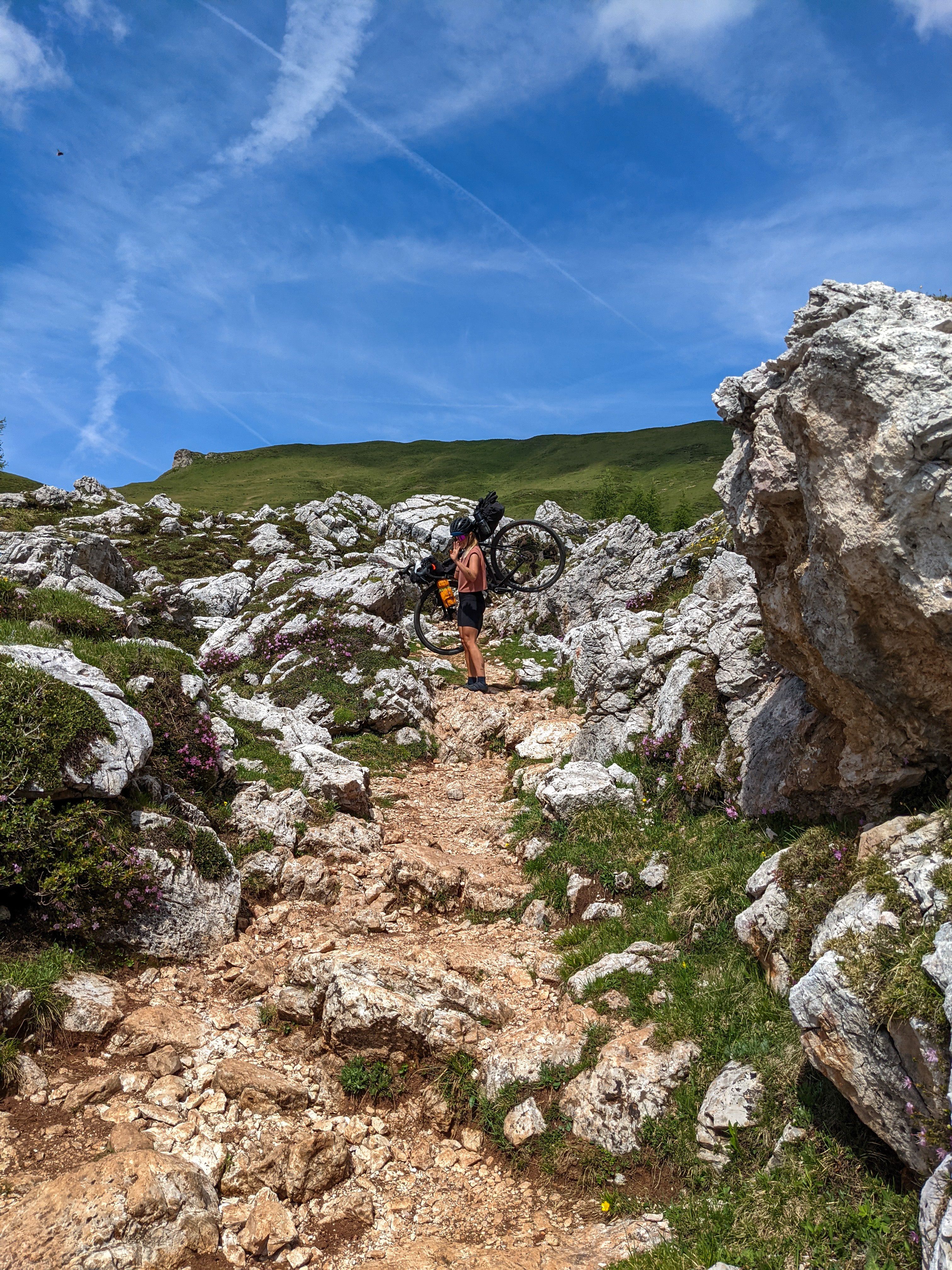 In the end, the Veneto Trail 2021 had everything that makes an unsupported bike adventure - a wonderfully scouted route and simply a good time with new and old friends. All outdoors on the bike. I want more of it.
So 1000 thanks to Andrea and the guys at Bombtrack for making it all happen. See you next year.

And here’s the link to the website, in case it’s got you hooked, too: https://venetotrail.eu/ 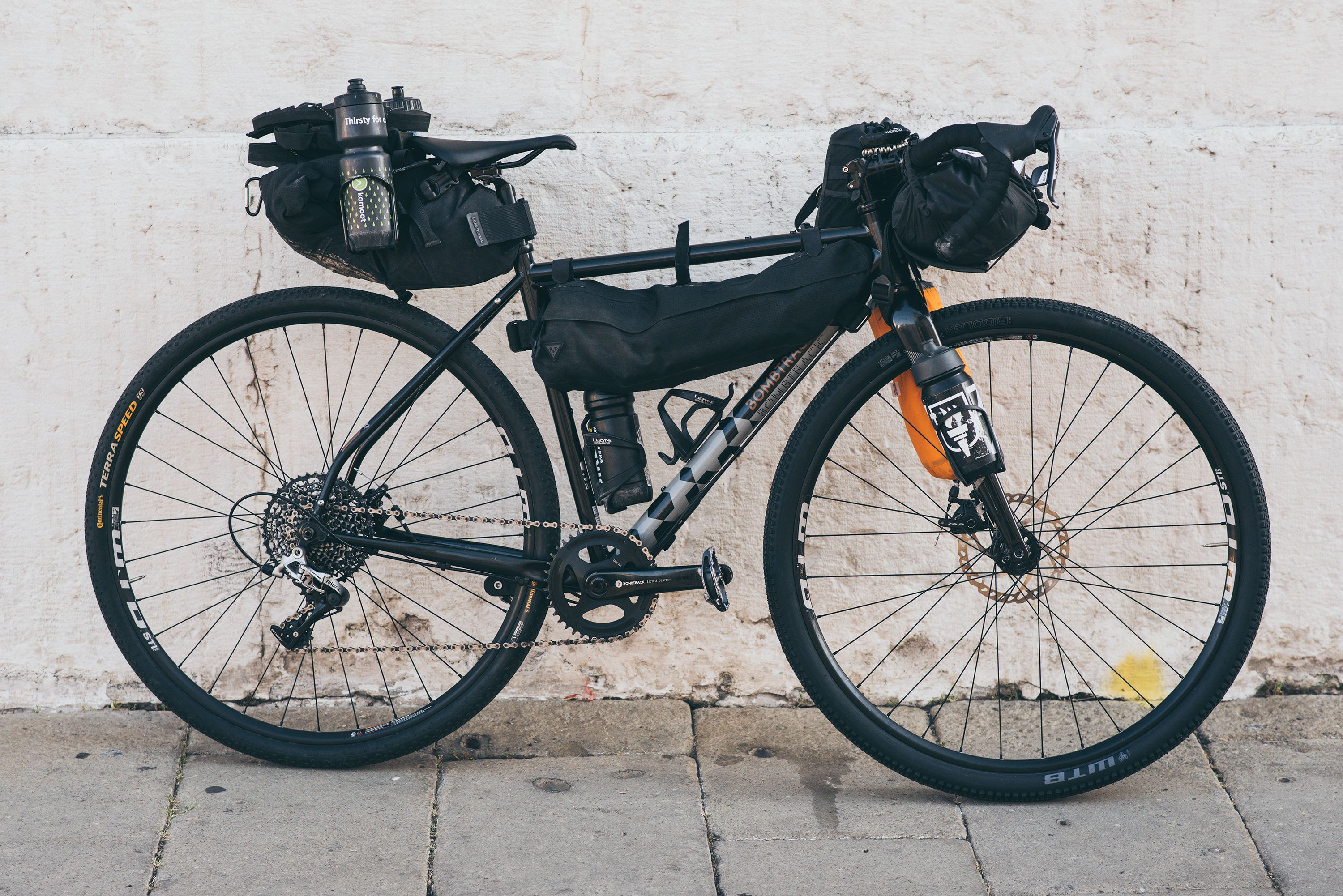 In constant hunger for a fine, dazzling, tingling yet adventurous story in the mountains with only the essentials one needs.