Last year in November we had the great pleasure to travel to South Africa to ride parts of the incredible Rhino Run route from Plettenberg Bay in South Africa to Namibia. The Rhino run you ask? It’s an unsupported ultra distance bikepacking race set up by the amazing people at Curve Cycling. Ultra Cycling legends Ryan “Rhino” Flynn and Jesse Carlsson set up an incredibly brutal challenge for riders on the rough backroads through the country side. A varying terrain from Ocean Side, over indigenous forests, lush farm fields and of course: desert like landscapes.

South Africa is different from what you think

But not only the landscape, culture and people blew our mind. As privileged europeans we tend to just create an image of places like South Africa. Believe me: It’s anything but the things you think of it. A country so much ahead of us in inclusivity. A place that combines so many cultures, beautiful art and highly sophisticated industry and scientific research centers as well. However it’s also a country scarred by colonialism and Apartheid. Where rich and poor couldn’t be further apart. Where still a few wealthy reign over the majority of poor people.
Townships are growing bigger and bigger outside the metropolitan areas like Cape Town. Only few people can afford a car and public infrastructure is limited. There are buses, but the roads are chaotic and traffic gets stuck regularly. Even if: Does the bus go to your school or workplace? And if so at the right time? Generally those buses work more like taxis than what we would consider as buses. Considering the average income of people in townships buses are relatively expensive.

That all leads to a lot of problems. If people can not get to school or to work they are basically stuck. Literally. And keep in mind: It’s not that you can just move to another location. 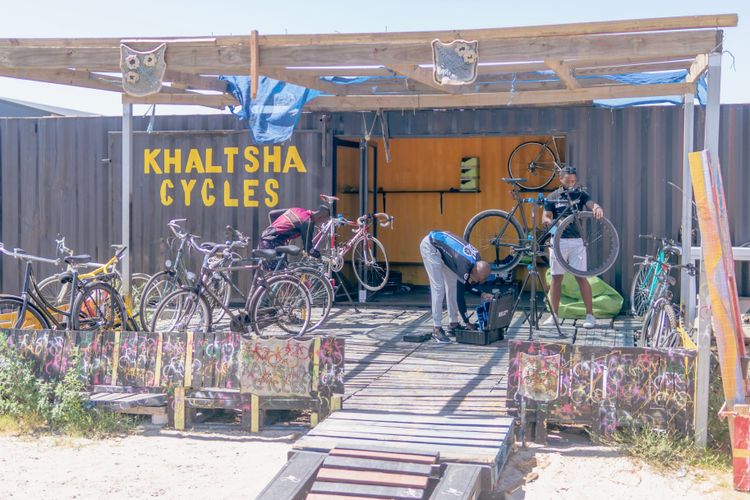 Bikes are the future of Africa

So what’s the solution? Clearly it cannot be cars and clearly it will not be public infrastructure where townships are growing uncontrolledly and without any official planning by the government. The answer is more simply than you would think. It’s bikes. They are cheap, easy to maintain, low entry border to using them and most importantly: They bring you to where you need to be. Maybe you already heard about Qhubeka bikes? No? You should. Qhubeka donates bikes to people in need in Africa and helps them get to school, work, buy groceries and more and you guessed it: You can contribute with your donation!

On my last day in South Africa I visited the second largest township of South Africa with Rae Trew-Browne Khayelitsha. And before you ask yourself the question: I felt completely safe and welcome there even as a stupid european white guy. We visited a place called Khaltsha Cycles and were completely blown away by the place. Two ship containers repurposed to be a workshop and a bar. A sunroof made from broken rims and a giant Heart in front of the shop welded together from all the things they could find. Frames, handlebars and more. To make it short: I never saw what we consider trash arranged so welcoming and beautiful. On a small road in the back behind the shop a few kids, but also adults, screaming in joy trying different bikes and learning to ride. 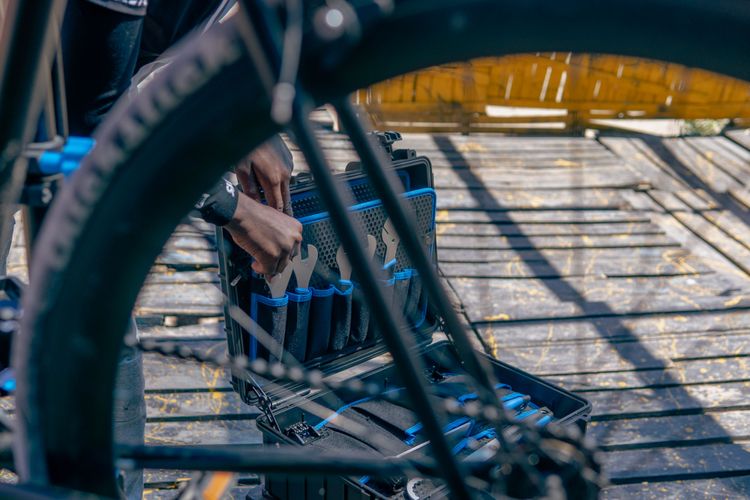 Wow! Consider this scenery. Now you know what we are talking about in this interview. You’re still here? Good. Because we spoke to one of the two owners Sindile Mavundla asking him about the shop, the idea, and what is the future of his business and cycling in the township and beyond. It is inspiring and left us breathless. Here we go!

Hi Sindile! Thx so much for being available and telling us about Khaltsha Cycles. As I understand you are one of 2 founders behind the shop. How did you get the idea? When did this bike shop start?

Thanks for having me Max. The idea started 5 years ago after coming back to South Africa and working with Open Street Cape Town as their Non-motorised Campaigns Manager. I was heavily involved in pushing for active mobility in the City of Cape Town however I always knew that before we have Cape Town as a cycling city we need to have Cycling Townships first. Hence in 2019, we started Free Learn2Ride classes in Khayelitsha (the second biggest township in South Africa) to create a culture. Little did we know that we created a new market of cyclists. Now we have a community of 165 cyclists in our cycling group, a vibrant bike shop, a workshop and our new coffee shop. 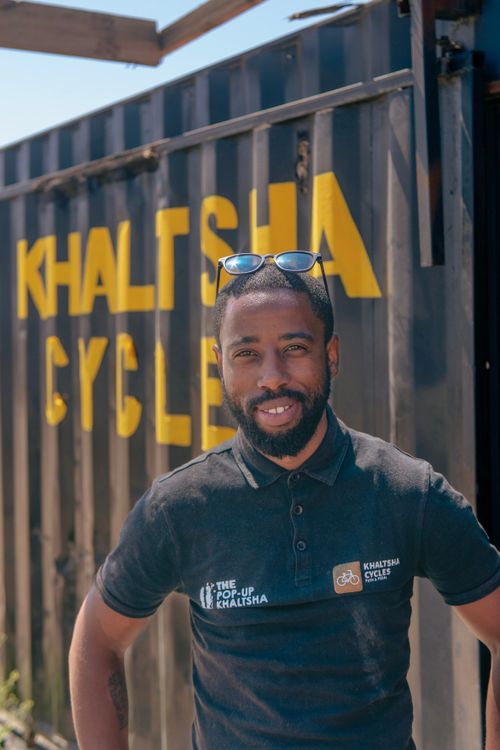 Why didn’t you just build a bike shop in a fancy neighbourhood near the beach? Wouldn’t It be easier to sell a few expensive bikes and make a living out of that?

We have no interest in that. Our focus is to bring cycling back to townships. They don’t have to travel 50km to get their bike serviced. They can just travel 3 km to our store. The most important thing for us as well as the impact of bicycles. We have seen such dramatic economic growth in our community due to cycling, we have seen families opting for cycling instead of driving to work (saving cash every month) our township tourism has been successful due to bicycle tours. We have also created job opportunities and continue to find opportunities on how we can employ more young people.

Most bike brands have no idea how to approach the black township market and we happen to have the knowledge and confidence. 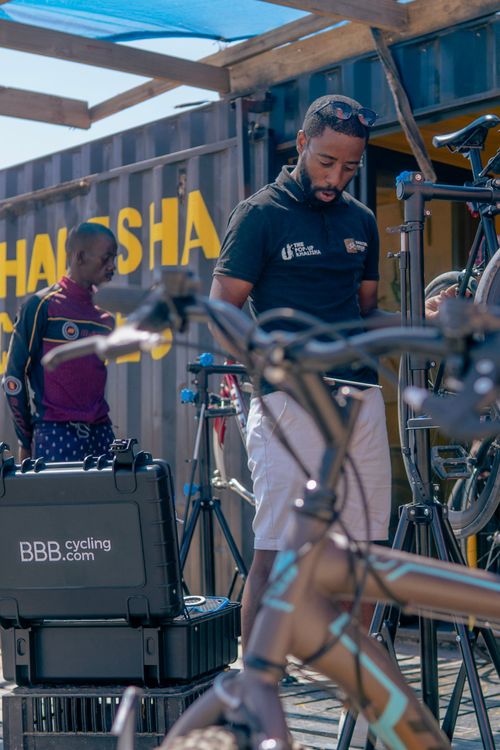 Wow, that’s amazing, but why do people in townships like Khayelitsha need bikes? Can’t they use public transport or cars?

Khayelitsha is flat and easy to just jump on a bike and commute to the mall or whatever errand. Public Transport is an expensive current. A person commuting from Khayelitsha to City Centre pays R2 750 (app. €165) per month on a Mini Bus Tax, Golden Arrow bus service has just increased fare by 8% with an expected increase again mid-April/May.

Our bikes only start from R1 500 (app. €90) for a commuter bike which makes more sense for a person to invest in a bike and commute to work saving them the much-needed cash which they would have used on transport. Also, bikes have an amazing health benefit which most of our older customers look for to get fit while moving from point A to point B. 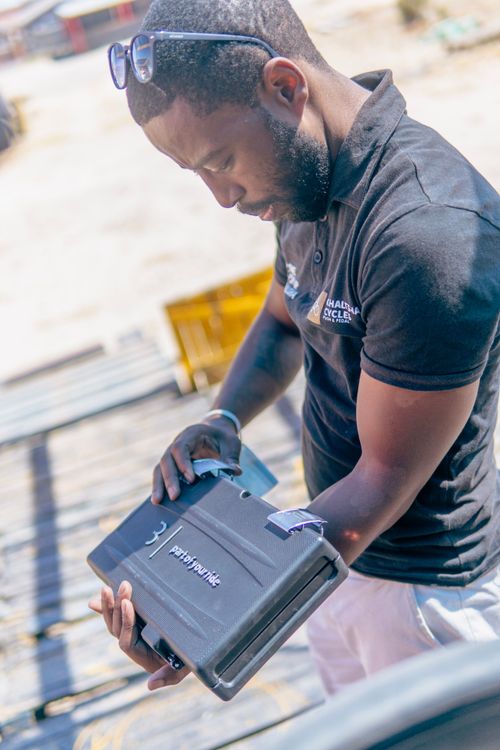 I think especially for people in Europe it is very hard to understand: What does a bike mean for people in townships? What possibilities open up for someone with a small income, once they get access to a bike?

A bike is a freedom, pure freedom!

Despite being a bike shop and obviously selling bikes and repairing them, what other services do you offer to the people of Khayelitsha?

Our space is more than just a bike shop it’s a space to meet and connect. With our newly established coffee shop people can now use WiFi, meet with friends, network etc. We also offer bicycle rental to the public, community rides during the week and weekends, we have learn2ride classes and we also run a series of mechanic training workshops for our community. 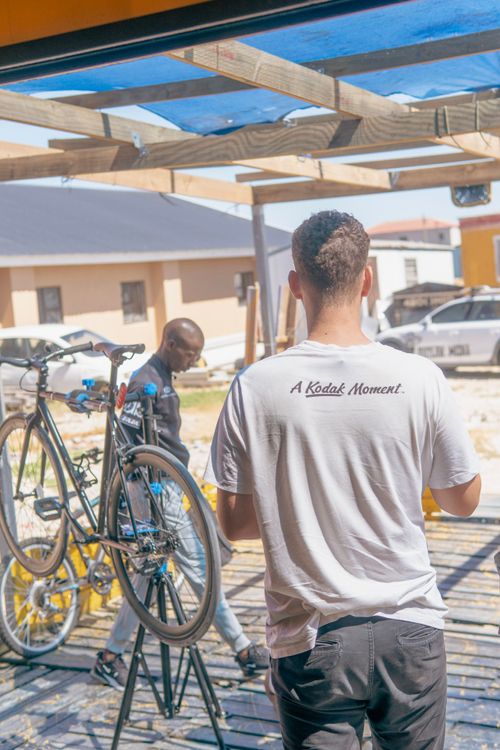 So does that mean I can just rock up at the shop and ask for a lesson in how to ride a bike? How does it work?

We now encourage people to book a class via our website our website however if you rock up on a Saturday we won’t turn you back.

Wow that’s amazing and an idea that more shops should pick up! So, what is the hardest part about having a bike shop?

The hardest part now since we are growing is to find the right human capital who share our values as a bike shop, however I think we have the right people in the right places at this point.

What is the best part?

For me, the best part is to see happy faces leaving the shop and coming back again. I have put a lot of hard work into this business. The happy faces just make everything worth it.

The happy faces just make everything worth it.

Finally: What is the future of Khaltsha Cycles? What will we see in the coming years?

I have 7 years as the Managing Director of Khaltsha Cycles and my goal is to take this model all over Africa. I think we have such a unique model that can be replicated around Africa. We are actively looking for partners and investors to fuel this dream and make the goal a success.

That is amazing! We wish you all the best and success with your goals and ideas. Thank you so much Sindile. It is rare you meet people that inspire you so much. 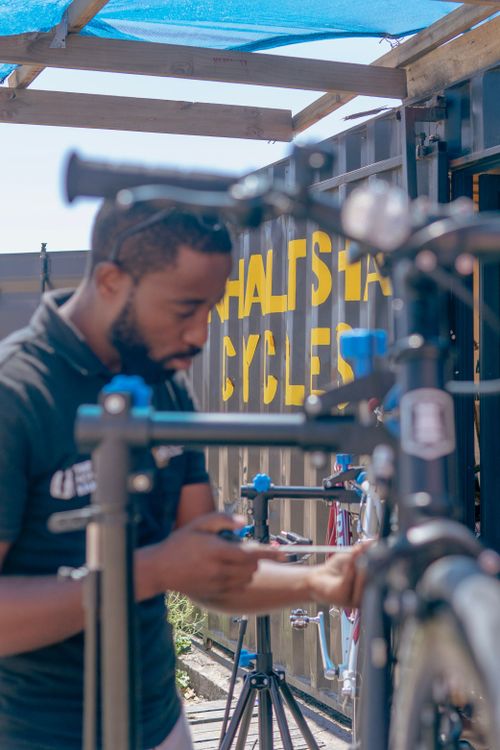 One thing that disturbed us during our visit were the tools the mechanics used to fix bikes. Often times it was more a bodge to be honest. Something to make it work with the tools they had at hand. We were told that now as they opened a second location, mechanics travel back and forth between the shops to exchange tools.
Well, we couldn’t just let that pass and contacted our friends at BBB Cycling. Within the blink of an eye the people at BBB organized all the tools you can think of for fixing bikes and shipped them to Khaltsha. Rae and Stephen went to the shop, again when the mechanics received their new tools and took some pictures. Thank you so much to BBB and we hope the people at Khaltsha find good use in them.

You didn’t see our film and read about our bikepacking trip to South Africa? Read about “Buy A Donkey” here.